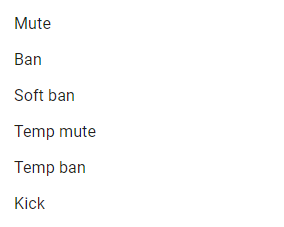 Users will be unable to send messages on text channels. Mute the user only if a muted role is selected on the settings, otherwise, no action is taken. Moreover, if the user tries to leave and rejoin he will automatically get the muted role.

Ban the user from the guild

Ban the user from the guild and prune messages old 7 days.

Mute the users for a determinate time

Ban a user for a determinate time

Kick the user from the guild

This indicate the amount of time that warnings should be counted in, for instance a timeout of 1 day will count all the warnings done by the user in one day

Option available only for Temp mute and Temp ban and indicate the duration of the action, for instance a duration of 1 day will mean that the user will be muted/banned for one, afterward he will get unmuted/unbanned